The naissance of Vitesse Cycle... and Trek bicycles

In 1975, Seaway Distributing, which imported Stella Bicycles, owned a chain of bicycle stores called Vitesse Cycle. These three locations—Madison, WI, Janesville, WI, and Normal, IL—established themselves selling Stella and Viscount bicycles. But the mid- to late 1970s marked the end of the 70s bike boom, and business began to decline. In 1976, the Seaway Corporation decided close its Madison store and sold the remaining two others to their local store managers. This would turn out to be a historic decision; it was this move by Seaway that would mark the beginning of the preeminent Trek Bicycles, a brand that Vitesse has carried from its inception.

The Normal location, Vitesse Cycle, was at 100 N. Linden Street, just down the street from our current location. Half of the building was owned by Vitesse and the other half was owned by The Pub II—each waiting for the other to move out! After Seaway decided to sell, it was purchased by Ray Keener, Kim Newcomer, and Dale, Dennis, and Doug Kruse. Kim left in 1977 and was followed by Ray in 1978. It was then that Chris Koos, the current owner, purchased Ray’s shares of the business.

Presence in the cycling community

Since its creation, Vitesse has had a long, historied presence in the Central Illinois cycling community and, since the early 80s, has sponsored numerous teams and cycling events. The shop sponsored the Normal Racing Team (NRT) and co-sponsored, with Mitchell Fabrics, MJF Racing (which eventually turned into a cat 1 regional racing team). Vitesse also founded and sponsored the WJBC/Pepsi Cola Criterium—a Bloomington criterium series that became one of the most attended crits in the Midwest. With the Pantagraph, Vitesse co-sponsored a three-day Labor Day ride in Central IL called PAC RACC (Patagraph Area Cyclists Ride Around Corn Country). This was a very successful ride for nearly a decade, with a peak attendance reaching 1,100 riders. Mud, Sweat, & Gears, a mountain bike/cyclocross race, now organized by the Comlara Off-Road Biking Association, was originally founded and sponsored by Vitesse. In the late 80s Vitesse founded and sponsored the Tour de Femme, an all-women bike tour that ran for five successful years with an attendance reaching 250 cyclists.

During the early 80s, the Constitution Trail was in its proposal and early planning stages. The Trail would be laid on the abandoned Central Gulf Railroad and required assuaging some apprehensive community members. Dale Kruse, then still partial owner of Vitesse, foresaw the future Trail as an excellent way to improve his community and promote healthful, outdoor activities. He became very influential in the early development of the Trail and it is now a beloved hallmark of the Bloomington-Normal community. 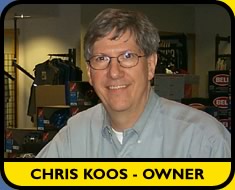 In 1992, Chris Koos bought the remaining shares of the business from the other partners. Shortly after, a local running store went out of business, which left a niche to be filled in the community. In response, in 1995, Chris moved the business to its present location and opened its sister store, Often Running.

Vitesse Cycle has carried many quality bicycle brands and has truly had a part in the history of cycling in the United States. Through the years, Vitesse has had: Sekai, Motobecane, Raleigh, Viner, Panasonic, Bridgestone, Specialized, Nishiki, Diamondback, LeMond, Cannondale, Gary Fisher, Giant, and, of course, Trek. Even 30 years later, we still see these vintage bikes return to our shop, still proudly wearing our shop sticker!

Vitesse Cycle & Often Running remain heavily involved in local communities, in charities, and in schools. For the past 12 years we have sponsored the McLean County Wheeler’s Spring Metric and for 10 years we have participated in their Bike Give-Away. Most philanthropic relationships vary from year to year, but there are a few we support annually; we proudly provide continued support to The Lake Run Club, Tri Sharks, The McLean County Wheelers, The Farm Bureau's “Ag in the Classroom”, The Illinois Heart and Lung Association, and The International House at ISU. And, of course, you will see us at about every foot or bike race in Central Illinois.

We’re proud of our community and are excited for its future; we will always strive to promote healthy lifestyles as we continue to improve our product offerings and customer service. 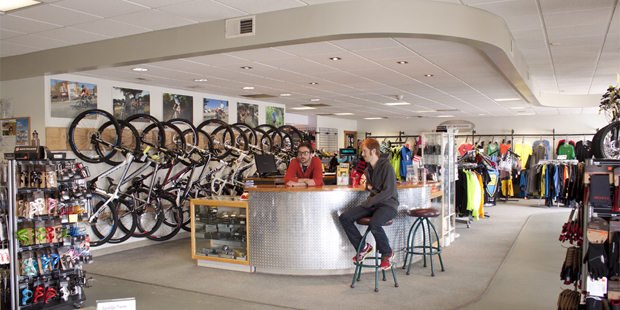